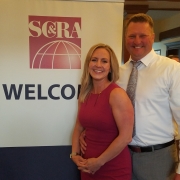 Wilkerson Crane Rental, based in Kansas City, Kan., serves Kansas, Missouri, Nebraska, and Oklahoma with its fleet of 19 cranes, ranging from boom trucks to a 500-ton Liebherr LTM 1400-7.1 all-terrain crane.

The Wilkerson brand has a 40-year history, but the new owner Diana Holt, purchased the business in 2013, returning the company to its family-run roots. Diana Holt, President, and Jeff Holt, Director of Operations, are the wife and husband team who gave Wilkerson a new lease on life just six years ago. 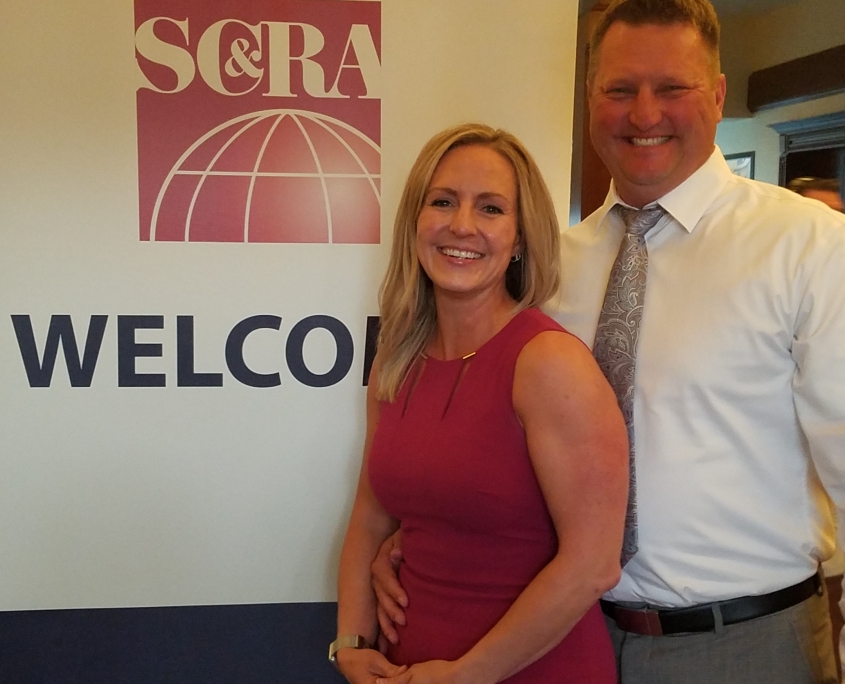 When the Holts found out Wilkerson was closing, they immediately knew they wanted to keep it open. “It was practically a family business at that point anyhow,” said Diana. Jeff and his dad Fred, Sales Manager, had been previous employees. While they retained the name, they had to start from scratch building a new fleet of cranes.

Even before becoming Director of Operations, Jeff was familiar with DICA’s SafetyTech Outrigger Pads, which he used as an operator. “About 10 years ago, we began making the conversion from using wood mats and cribbing to DICA Pads because we were looking for durability and safety,” he said. Wood mats typically lasted about a year because weather and ground conditions can vary widely with all four seasons in the Midwest. “You never know when your pile of timber is going to be soaking wet. 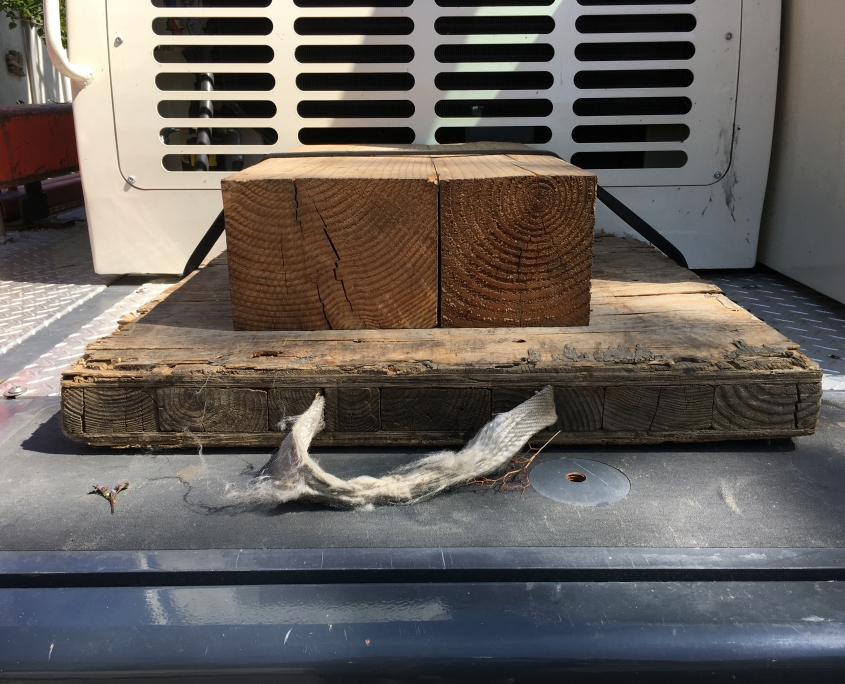 An example of the type of wood outrigger pads Wilkerson discontinued in favor of DICA’s engineered SafetyTech Outrigger Pads.

With DICA’s SafetyTech Pads, which are waterproof, it’s a given our outrigger pads are going to work,” said Diana. In addition, Wilkerson operators like the DICA patented round outrigger pads with recessed handles which makes them safer and easier to use. 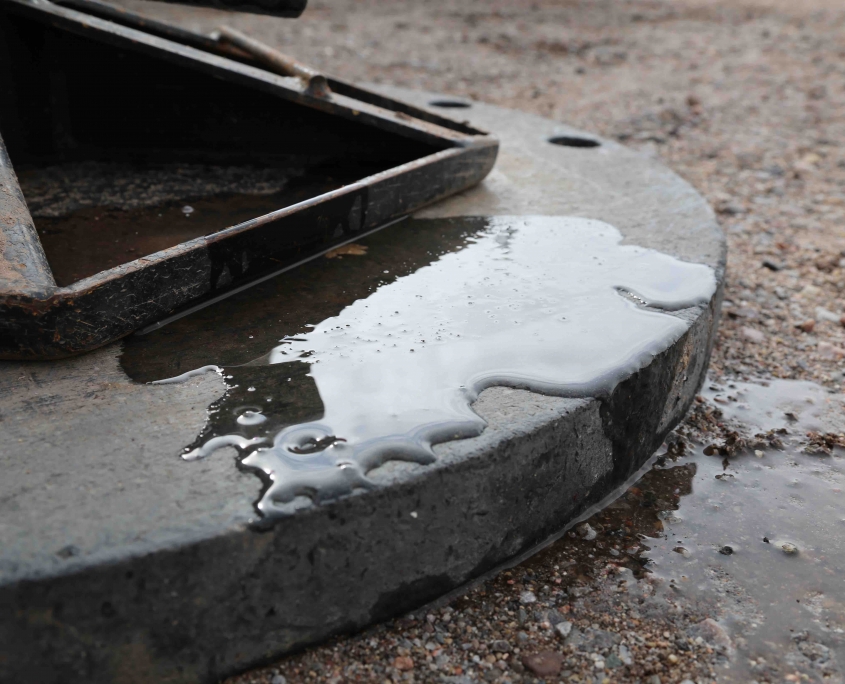 DICA’s engineered SafetyTech Outrigger Pads are waterproof, and provide an important dependability factor for the team at Wilkerson Crane. 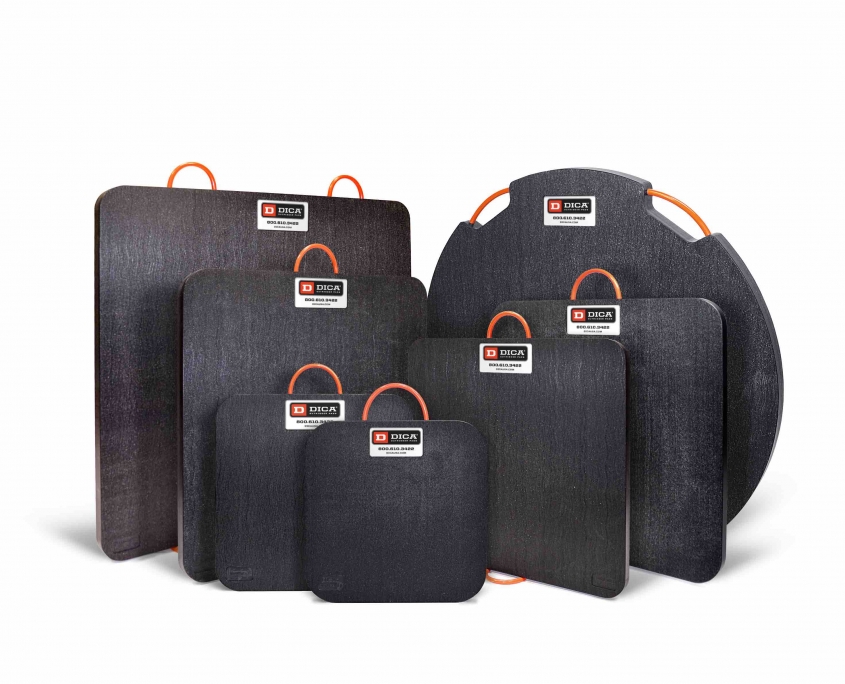 The Wilkerson team found the ergornomic TuffGrip handles made their DICA Outrigger Pads safer and easier to use.

Then the company purchased its first 500-ton crane. “For that class of crane, we didn’t find anything comparable to DICA’s FiberMax Crane Pads,” said Jeff.  “We were used to buying timber and steel mats. I had a bit of sticker shock when Jeff first came to me with a proposal for buying FiberMax,” said Diana. “But as I began to understand the total costs associated with wood and timber, and the weight and transportation savings we gained with FiberMax, it made sense,” she said. 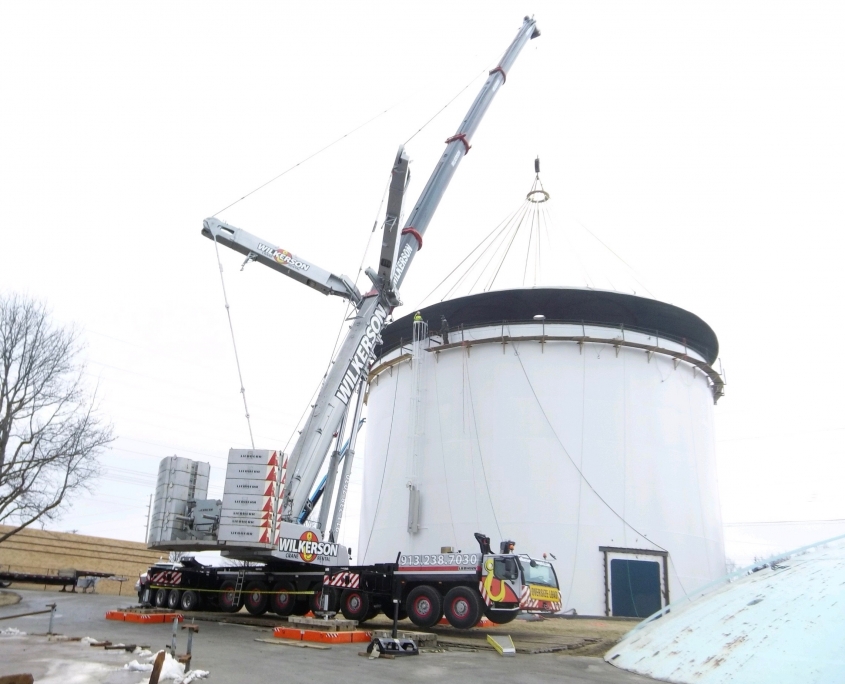 “The transportation savings is incredible,” said Jeff. “With FiberMax, we save a whole truck load every time we go to move the crane.” Essentially the product pays for itself within two years. After that they begin making the company money because of the ongoing transportation savings, he explained.

“When you are spending that much on a big crane, the last thing you want to do is scrimp on your accessories,” added Diana. So, despite the higher initial purchase price, the Holts ran the numbers and identified an opportunity for an exceptional return on their investment.

Getting the right product

“DICA’s knowledge of the industry, and their expertise in helping us purchase the right product for our equipment,” was important to the buying process, said Jeff. “They worked with us to determine the biggest footprint we would need to accommodate the ground conditions we may face,” he said.

The 500-ton Liebherr LTM 1400-7.1 all-terrain crane now heads to the job site with a set of FiberMax FM9x6x12 Crane Pads, which have 400,000 pounds maximum rated capacity. The equipment has been put to work on such notable projects as Arrowhead Stadium, wind farms, power plants, and setting a tug boat in the Missouri River. 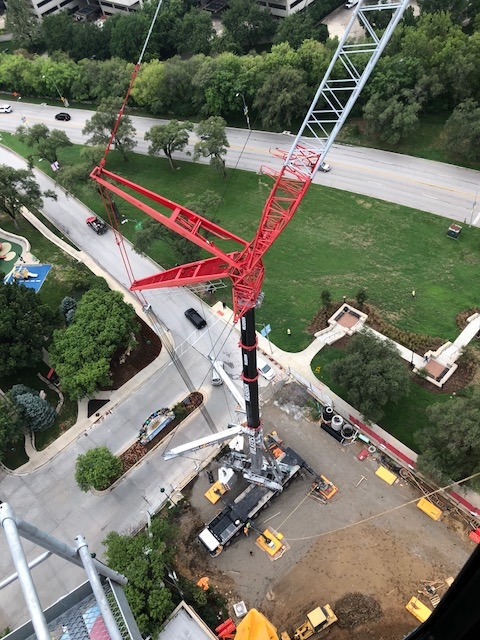 “We like to say that our customers know their job will be raised right because our people were raised right. But it’s not just a slogan,” said Diana. Wilkerson’s operators, a crew of 40+, go through three years and 4,000 hours of training in addition to being certified. “Our people really make the difference in the service we provide,” said Diana. Often operators stay assigned to a specific crane, which provides a sense of ownership of the equipment. “We believe in investing in our people—whether that’s helping them transition to a different piece of equipment with training or providing them with tools like quality outrigger pads and crane pads to make their jobs easier and safer,” she said.

DICA is a family-owned and operated company that specializes in building high performance engineered outrigger pads, crane pads, and cribbing blocks that are lightweight, easy to use, and long-lasting.

DICA products are proudly Made in the USA, ASME B30.5 compliant and used by operators in 40+ countries around the world.