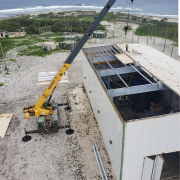 DICA and our SafetyTech Outrigger Pads have been proud to play a part in the clean up of World War II waste on Wake Island. Wake Island is a historic WWII battlefield, part of the Pacific Remote Island Marine National Monumentand and is one of the most remote islands in the world at approximately 2,138 nautical miles west of Honolulu.

Wake Island and the Koberg family (founders, owners and operators of DICA) have a previous history. During April 22-28 1944, U.S. Navy Radioman and Koberg relative Leo Levien was serving aboard the USS Iowa and part of Task Group 58.

The Iowa supported air raids on Hollandia, Aitape and Wake Islands to support Army forces on Aitape and at Tanahmerah and Humboldt Bays in New Guinea. These raids were part of what is known as “The Approach to the Philippines” which contributed to the eventual surrender of Imperial Japan.

Over the past three field seasons, Brice Environmental Services and the U.S. Air Force have completed the complex collection, sorting, hauling and removal of over 3,000 tons of materials. The result has been a significant reduction in the environmental impact to the island.

This critical Air Force environmental project was featured in the Jan-Feb 2019 issue of the Society of American Military Engineers (SAME) magazine, and can be read in it’s entirety below photos provided by Brice Environmental of DICA DR60-2 (60″x2″) pads in action. 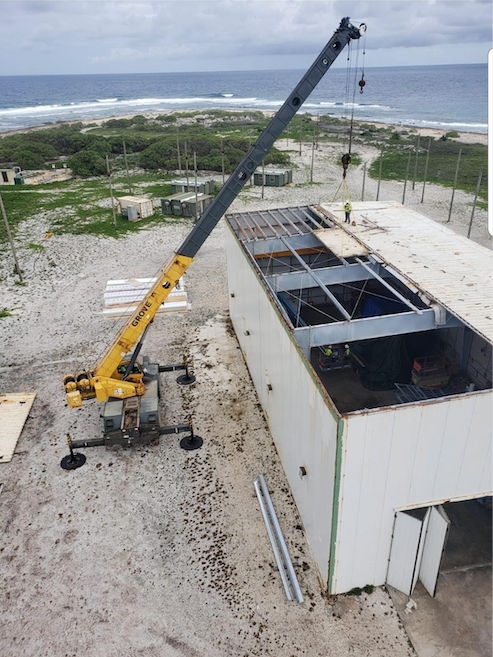 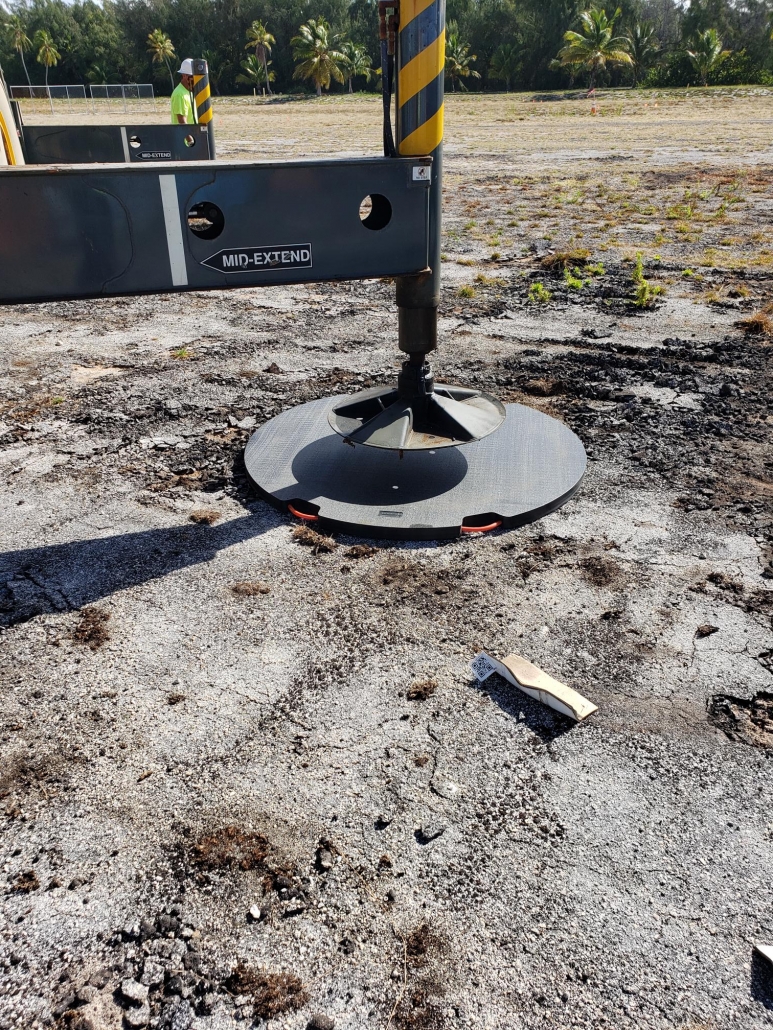 When the nearest disposal facility is located 2,200-nmi across the ocean, solid waste management on Wake Island is hardly a curbside pickup operation.

But considering its lengthy history of active military operations going back to the 1940s, and a population of 4,000 people in its heyday, Wake Island Atoll has since accumulated considerable solid waste in open dumps.  Although a traditional means of solid waste management across the Pacific Islands, the method is not ideal for sea-level islands and coral atolls of this region, where limited land area eliminates landfilling as an additional option. 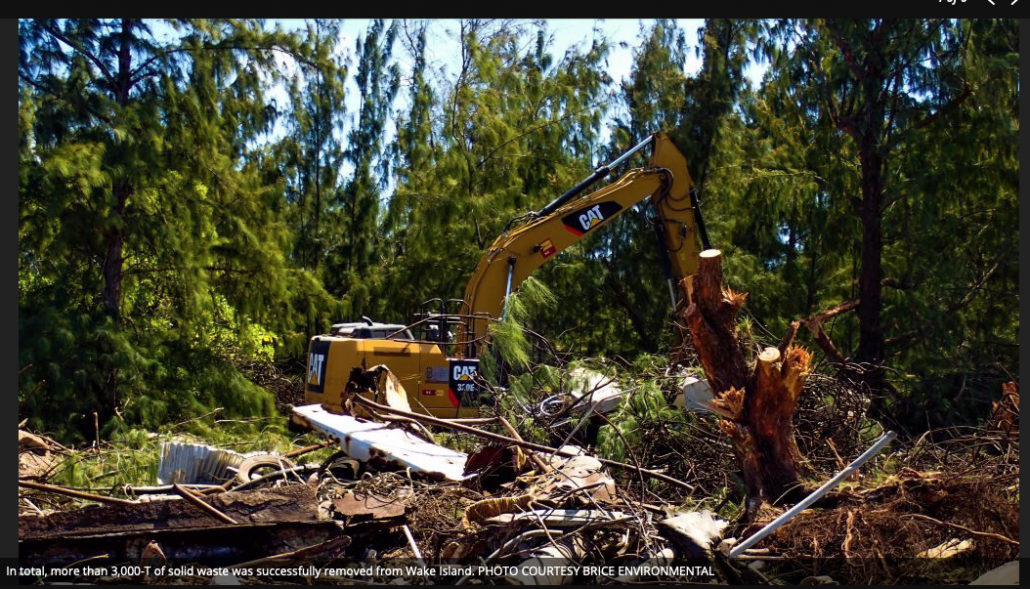 In 2014, the Department of Defense conducted an inventory of solid waste on Wake Island. Entangled in years of vegetative growth, several thousand tons of legacy waste dating back to World War II including metal, tires, building materials, and vintage vehicles were surveyed.

The Air Force Civil Engineer Center (AFCEC) and the 611th Civil Engineer Squadron, with contracting support from the U.S. Army Corps of Engineers contracted with Brice Environmental to perform waste removal to avoid further impact to the island’s natural environment.

A complex and costly endeavor due to the remote location, the project demanded creativity and flexibility. Equipment required ranged from a 75-T crane and 70,000-lb capacity flatbed trailer to handheld scrapers and turkey frying oil. A dedicated multi-skilled field team worked over the course of three field seasons on one of the most isolated locations in the world to complete the job.

To begin removal, AFCEC/611th Civil Engineer Squadron first surveyed the solid waste areas for active bird nests in compliance with the Migratory Bird Treaty Act and the squadron’s Integrated Natural Resources Management Plan. With 80 percent of the solid waste entangled within vegetation, removal operations were, in a word, difficult. Trees, shrubs, and surface debris within and immediately around the solid waste areas were cleared using an excavator. The waste was then collected, cleaned by shaking the excavator bucket, and pressure-washed to avoid the transfer of pests, vegetation, and soil to the mainland. Thousands of smaller pieces of solid waste were manually removed, sorted, and cleaned.

Similarly, the field crew manually removed water and debris from inside thousands of rubber tires. Cleaned solid waste was sorted into containers or piles by type of waste. Over time, each was transferred to the marina for barge loading; an excavator helped stack the piles high and narrow to keep the marina as clear as possible for daily operations. Ultimately, the waste was transported to the mainland. Scrap metal, rubber tires, and drywall were recycled either in Washington or Oregon. Non-recyclable waste, including plastic and asphalt, were landfilled in Oregon.

Barge planning and loading proved to be the most complicated aspect of the work. Though detailed barging plans were devised annually, field execution was more difficult. Sorting, organizing, staging, and loading were modified each barge season based on lessons learned from the previous year. At the same time, each barge season involved new types of solid waste—with varying sizes, shapes, volume, and weight that had to be efficiently organized and stacked on the barge deck to maximize the load. 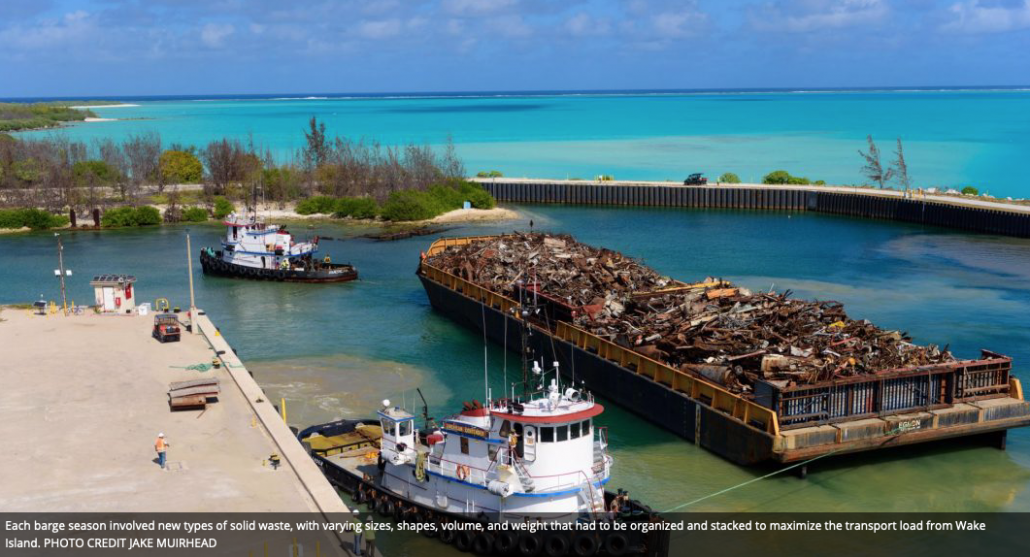 Each barge season involved new types of solid waste, with varying sizes, shapes, volume, and weight that had to be organized and stacked to maximize the transport load from Wake Island. PHOTO COURTESY BRICE ENVIRONMENTAL

Though the 2014 inventory estimated the legacy solid waste types, volumes, and weight, they were, at best, developed using a combination of tape measures, wheel counters, visual observation, product specifications, and internet research. It was only when Brice cleared the vegetative overgrowth, dug, cleaned, sorted, staged and loaded the solid waste that the reality became clear.

While digging through decades-old piles of solid waste entangled in vegetative growth had its challenges, perhaps more problematic was a 64,000-lb old crawler crane carriage too big to move with a single piece of heavy equipment, as well as a total of five 10,000-gal tanks that were partially filled with nonhazardous tar.

The field team’s problem-solving skills were put to task and proved their worth. Through a combination of trial-and-error and concerted research, a mechanic, a hyster truck, and a loader got the crane carriage lifted, transported, and loaded onto the barge. A couple dozen gallons of turkey frying oil and hand-scrapers were used to remove the tar from inside the tanks, and a plasma cutter split the tanks in half to be stacked like bowls on the barge, leaving sufficient space for much more solid waste to be hauled off the island.

Successful removal of these eyesores from Wake Island was a major feat in support of the Air Force’s environmental goals.

Every barge went out full. And because the materials did not weigh as much as anticipated, space in terms of volume filled up long before total weight became a concern. Further, the approach to loading the barge was often modified “on the fly” to ensure safe ocean passage based on the barge safety assessment. At the direction of inspectors, considerable effort was spent shuffling the solid waste around the deck for as long as it took to achieve the proper draft at the bow and the stern for a safe sail across the ocean.

Time was also a budgetary concern. With a daily idling cost of approximately $25,000 for the barge, it was critical to minimize the number of days the barge sat in the marina. But for the Air Force, the goal was unwavering: to haul off as much solid waste as possible. To enhance barge capacity, shipping container flats with stanchions were placed on their side to create an 8-ft wall on the stern to stack scrap metal higher on the barge. Old storage tanks on the island were cut in half to create bins for small pieces of metal and to secure the materials on board for the trip. An excavator closed spaces between containers and bins, to allow the loading of more solid waste. Together, these approaches increased the load volume by at least 20 percent.

A constant balancing act, it took approximately 10 to 14 days to load the barge each field season. Ultimately, its final load and capacity were still dependent on the captain’s assessment which determined whether the load was secure for ocean transport, if the proper barge draft had been achieved, and if the weather would cooperate during the two-week trip to Honolulu, and onward to Seattle, Wash., for proper disposal and recycling.

In the end, after three barge seasons, a total of 3,290-T of solid waste had been successfully removed from Wake Island.

The return of these open dumps to their natural state has transformed what was an area of legacy solid waste into a new legacy of environmental integrity for Wake Island—a testament to the Air Force’s commitment to environmental restoration on the grounds of this historic World War II battlefield.

DICA is a family-owned and operated company that specializes in building high performance engineered outrigger pads, crane pads, and cribbing blocks that are lightweight, easy to use, and long-lasting.

DICA products are proudly Made in the USA, ASME B30.5 compliant and used by operators in 40+ countries around the world.